You are here: Home / Audi 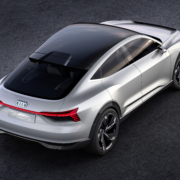 Audi is targeting to build a four-door performance coupe sedan electric vehicle by 2020. The Audi e-Tron is expected to be a sporty car and the brand will be responsible for building an all-new character trait for Audi’s line of sports vehicles. Audi is rumored to be targeting to produce 25 electric vehicles, maybe they will reach their target.

The e-Tron GT will take technology, design features, drivetrain hardware, and cabin specs possibly from the e-Tron vehicles. Surprisingly, it’s estimated to be an even more impressive EV than the recently introduced e-Tron Quattro SUV.

The upcoming e-Tron GT is said to be able to charge up to 80% in less than 12 minutes. The brand is expected to be the first 800-volt battery system that will enable up to 350kw charging in a production passenger car.
The current battery is definitely not capable of handling 350kw charging system but the manufacturers are set to build a next-generation battery that will be able to handle the task. Thanks to the unity joint venture between Ford, Daimler, VW group and the BMW, the VW groups electrify America is also installing charging stations that are of up to 350kw charging.

Porsche and Audi partnered and are cooperating on a shared architecture for an electric and autonomous vehicle. That being said, Audi will benefit from Porsches work on the electric powertrain that was developed for the Taycan.

The concept vehicle is equipped with a powertrain that can generate power output of over 600 hp (440kw) between two electric motors. As for the battery pack, they are aiming for it to be able to go over 500km (310 miles) of range on a single charge. Exterior

The new e-Tron GT is borrowing its design and inspiration from the Quattro SUV that was released earlier this year. The mid-sized sporty sedan will take the basic design logic of other Audi sedans. That means the brand will not be for the extreme, futuristic shapes and over modified design surfaces.

Audi is targeting to build the e-Tron GT with a long, dominating hood, low glass surfaces, and a high shoulder line. It will definitely be a luxury sedan with a sexy outlook that will surpass the conventional e-ton Quattro.
The car will take a short stance and Audi offers a classic muscular shape for the front and rear, e-Tron GT could become an Audi with a striking attitude. This means the driver will sit lower, the roof will be lower and the pillar will be shorter with smaller windows than the e-Tron Quattro.

Some of the detailed designs will include:

The e-Tron Quattro’s feature will carry over into the production interior of the Audi e-Tron GT. The features will include:
• Two screens in the central stack (infotainment screen and climate control screen)
• Visual cockpit (one screen behind the steering wheel)
• Two screens on the doors above the door handle instead of rearview mirrors. 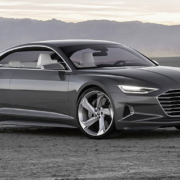 According to Audi, the 2020 model year will see the arrival of a fully electric, self-driving luxury sedan called the e-Tron. Audi will be looking to roll out a sedan that’s recognizable and will be borrowing its features from its predecessor the A8.

In regards to the A9 powertrain, the production of the car is expected to borrow a similar setup of the e-Tron Quattro, which would imply it having three electric motors; one at the front and two at the rear axle. The total horsepower is estimated to be packed up with a 95kwh lithium battery pack. This means the car can travel up to 300miles between charges.

As far as performance goes, the A9 should be able to hit 0-60mph in approximately 3.8 seconds or less with a good setup. It’s safe to assume that the concept car will be able to reach the top speed of 155mph which is on the limited side. The brand intends to offer a delete option that increases the benchmark of around 190mph.

Audi is looking to have it installed with some massive single-frame grille with the Audi rings on the upper section, angular headlamps with LED light clusters, muscular engine hood and big vents at the corner of each bumper.

Although it’s not official, the A9 e-Tron will probably have the dimensions of a full-size luxury sedan car. The brand will give the car an overall crisp and modern look, better than the existing sedan Audi already have. The A9 e-Tron has a more aerodynamic appearance than the brands' other sedans, with a Tesla- style sloped rear end that will improve its range.

Audi A9 e-Tron is expected to have a shorter roof and slanted rear glass paired with shorter quarter windows. Contrary to the short general physique, the windows will be longer as well as the doors. Towards the back, we should see more muscular rear fenders, more aggressive side skirts, new wheels wrapped in low profile tires and a lower ride height for improved handling and a sportier stance.

Basically, the A9 e-Tron has features that include an upgraded version of its continuous air vent dashboard design, finer materials, and an overall cleaner, more elegant layout. The horizontal lines give the cabin a wider look; the seats are finished with perfect leather upholstery. The legroom will be spacious but the headroom and shoulder room will decrease due to the revised shorter general cabin.

Audi will add a few sportier touches, including carbon-fiber trim, a flat-bottom steering wheel, and instrument cluster and infotainment screens with bespoke displays and menus.

The technology package should be identical to the standard model and include Audi’s latest infotainment system with Apple car play and android auto, the new all traffic jam pilot, which works like a semi-autonomous system in heavy and slow-moving traffic up to a speed of 37mph. it also has a remote parking system through which the driver uses a Smartphone application to monitor and park the car via the 360 degrees advanced, high definition cameras. 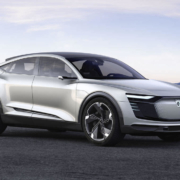 The E- Tron will make an electric mobility that is not just sustainable but exhilarating charged with electrifying designs, breathtaking driving and innovative technology to give you almost limitless freedom. The concept car was first revealed at the Shanghai auto show in 2017.

The Audi e-Tron sport back concept technology study uses three powerful electric motors; One on the front and two on the rear axle. The electric motors are highly efficient over a wide engine speed range, including low and intermediate load. This results in a satisfying driving pleasure above all with a high range.

The combining charging system with two connectors enables charging with AC and DC. The DC current has the charging power of 150kw meant to charge its large battery that is able to store up energy, meant to cFevover up to 400km (248 miles) in just 30 minutes.

Audi also installed an induction charging system. With this innovative charging socket, the e-Tron sports back concept can easily charge with the contactless inductive charger. This is achieved by the car sitting a charging pad with integral coil on the floor where the car is to be packed and connecting it to the power supply.

The focus is on not just powerful performance, but also maximum efficiency. Before even starting out, the driver can have the Audi e-Tron Sports back concept compute a drive train strategy to minimize energy consumption. Up to moderate braking, the electric motors are solely responsible for decelerating the vehicle. The hydraulic brakes only come into play for heavy braking. The driver can adjust the degree of recuperation in stages. At the lowest setting, no energy is recovered at all in certain situations. Instead, the isolated drive allows the coupé to coast without any retardation torque – one of the most effective strategies for increasing the range.

The concept features Audi's single-frame grille, with an illuminated four-ring logo. The front of the car is shaped for optimal airflow, and the dip in the hood also gives it a uniquely sporty look. Audi was the first in the world to adopt full LED headlights and gave matrix LED technology, laser lighting and led the brand towards its significant breakthrough.

Narrow light strips on both sides below the front lid – the daytime running lights – became the eyes on the face of the car. Thanks to a combination of LEDs and a micro mirror-studded surface plus complex control technology, a large number of animated movements and signatures are possible. When the e-Tron Sport back starts and also when the doors are opened, the system uses switchable segments to generate dynamic visual welcome signals.

Its 23-inch wheels are imposing, giving the car a muscular stance. Side mirrors are replaced by slender cameras, which improve airflow and provide a better view of the car's surroundings, helping to eliminate blind spots. 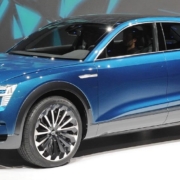 Audi has opted to use the name ‘e-Tron’ for its new battery electric vehicle range. The first EV is the e-Tron Quattro. The e-Tron midsize SUV is expected to deliver approximately 400hp and 400km/ 280 miles of range. This is made possible by the 95kwh battery pack. The EV will generally be priced above jaguar’s I-pace but less than the Tesla Model X.

Configurations of the vehicle will be different in the US market (compared with the European market). In the US, the following trims are available (in production 2nd quarter 2019):

It is estimated that Audi is targeting to hit 248 miles/ 400km spec range. That is very impressive. The trim in the front and rear motors are combined to produce 355hp and 487lb- ft in general driving. Audi says the e-Tron will produce 0-60mph in at least 5.5 seconds en route to an electronically limited top speed of 124 mph.
The e-Tron is using the latest SAE J1772 DC fast chargers, which can charge up to 80% in just 30 minutes at a rate of 150kwh. It is possible to charge the car overnight, as it is installed with a 9.6kw charger when using a 240-volt 40-amp level 2 charger.

The e-Tron has two electric motors providing all-wheel drive, along with five different suspension modes. The vehicle has a powerful tow rating of 4,000 lbs (equivalent) to any top-tier SUV.
A range is rated at 249 miles (400 km) – under the WLTP regime. EPA range is likely to be less than this e-Tron Interior.

Audi has retained its ice-like façade in the exterior design. The elegant eye-catching and electrifying car possesses a strong yet sleek SUV design. The designers sought to telegraph its electric little cues like the horizontal elements in the daytime. It has running lights and tail lamp designs that resemble the battery charge status icons.

Black inserts on the door trim the battery location as the center of power in much the same way that the hood bulges. The bulges are used to accentuate its powerful combustion engines. Audi says the e-Tron will be the first to production with the slim sleek cameras seen above in place of side mirrors. Unfortunately, they are not yet approved in the US.

The car offers exclusivity, class, and comfort. Audi has a reputation of having outstanding attention to details. The elegant interior design has ample room and centric technologies that are designed to elevate the driving experience.

The e-Tron is fitted with a pair of advanced feedback touch screens that is 10.1-inch upper one handling the entertainment, phone, navigation, and special e-Tron screens for handling the climate and comfort functions. With a touch of class, it’s insulated with a master sound proof system, dual pane windows, and a silent motor to enable a sublime ride, all through.

The interior transcends the everyday driving with a luxurious interior that includes: