You are here: Home / Chevrolet 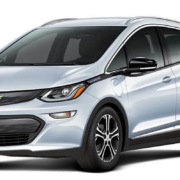 The Bolt EV is a groundbreaking vehicle, leading the charge against the automotive worlds, which is dependent on an internal combustion engine. When the Chevrolet Bolt launched at the end of 2016, it meant that people could finally buy an electric vehicle, with a decent range, and reasonable price tag. The Bolt’s 238-mile (EPA) range, rivals electric vehicles which are nearly three times as expensive, like the Tesla Model S 75D.

Although the Bolt is marketed as a crossover, in reality, it fits somewhere between a compact-crossover and a compact-hatchback. An interior passenger volume of 94.4 cubic feet and 16.9 cubic feet of cargo storage means the Bolt is more spacious than it looks. It generously has enough legroom in both the front and rear seats that technology provides a decent space for five.

Hard plastics abound inside the bolt. However, the manufacturers added some impressive textured materials to spice up the dashboard. The Chevy has improved the digital displays in the instruments cluster and central touch screen that look crisp and modern.
The modern cabins do an excellent job of protecting the passengers from outside noise. However, it's not completely insulated as you can still hear sharp wind sounds and tire noise when driving at high speed.

The bolt is fitted with a floored mounted battery powering a 200hp electric motor that ranges at 96MPGe and a 75 –mph highway range of 190 miles. A 288-cell battery pack, holding 60kWh of charge, powers the Bolt. It takes almost 10 hours to charge fully from empty when using a 240V, 32-amp Level 2 charger. But using a fast charging port will give the Bolt a range of around 90 miles, after just 30 minutes of charging. This large battery pack contributes to the Bolt’s 3,563-pound weight, which is pretty heavy for a car of its size.

Although the Bolt is heavy, it’s not slow. A top speed of 93 mph and a 0-60 mph time of 6.5 seconds come courtesy of the Bolt’s 149kW (200bhp) electric motor. More impressive, however, is the Bolts 266 lb-ft torque output, which is transferred to the road through the front wheels.

The Bolt’s electric motor provides instantaneous responses to accelerating inputs and ample low-end torque that lets you scoot ahead when the light turns green. Selecting the sporty mode makes the accelerating pads more responsive to driver inputs. Although the sporty mode doesn’t actually enhance acceleration, it feels like it.
The bolts brake pedals firm and provide above average stopping power. Note that the regenerative braking systems that recharge the battery when you lift off the accelerator, let's you drive forward without touching the left pedal. It easy to used to driving the Bolt this way, it gives the driver a pleasure driving it.

The Opel Ampera-E, which is basically the Bolt with an Opel badge, will be sold in Europe. There won’t be any right-hand drive Ampera-Es or Bolts, which is a shame for about a third of the world because, all in all, they’re great EVs.