You are here: Home / Fiat 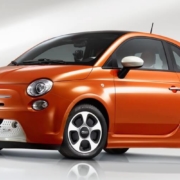 The Fiat 500e is a compliance electric vehicle and, as such, is only available in California and Oregon. It's safe to say that it’s a cool city car. Fiat 500e fulfills a number of several firsts:

Fiat essentially converted their gas 500 to an electric 500e, swapping the gas tank for a 23 kW battery and the engine for an 83 kW motor. The battery uses about 22.8kwh of the initial stated 24kw capacity for a tractive purpose. It takes about four hours to fully charge with a DC charger (208-240 volts) and around 23 hours on AC charger (110-120 volts). The Fiat 500e didn’t take the industry by storm when it was launched and hasn’t progressed much since then.

For the daily city driving, the ride is acceptable but they should consider improving the shock absorbers. The car uncomfortably wallows at freeway speeds, especially when bumps are involved. On the brighter side, the front and rear weight distribution is a plus, which makes it a breeze driving in the canyons. The steering even leans forward to the heavy side and due to the motor torque effectiveness, the car feels swifter than it actually is.

Lowest Range of All

The 500e will run out of range after 84 miles. This, frankly, is one of the lowest ranges in the EV industry currently and, unfortunately, there’s no DC fast charging option available. But level two charging, at 240v, will fill the 500e’s battery in less than four hours. Level one charging, at 120v, however, will only provide 9-10 miles every three hours – not great.

If you’re thinking of buying a Fiat 500e you’ll definitely need to be mindful of your charging routine.

The wonderfully styled two-door Italian hatchback wasn’t designed with space in mind, seating four people with its passenger capacity of 78.6 cubic feet. The seven cubic feet of cargo capacity available on the 500e is down three cubic feet on the gas version, due to the battery pack. The Italian style doesn’t stop once you get in the 500e. It’s definitely a nice place to be, especially if you get inventive with the multiple color options.

Overall the 500e isn’t a big player in the industry but, due to severe depreciation in value, it makes a great secondhand bargain.