You are here: Home / Honda 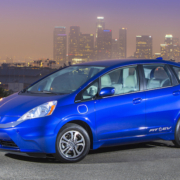 The new Honda fit is a fully electric powered car. The fit has already been a top-selling car for Honda. Its styling performance, size, passenger/ cargo room, and overall value have made have made a long-lasting success. It’s so trim and space efficient and well fit for universal duty as an enjoyable commuter.

Honda is looking to sell more than 100,000 of the new vehicles brands with the highest volume of electric motors. The Honda electric vehicle has 300km (186miles) range is likely not an EPA rated. Even if the real-world range is more like 200-240 km (125-150 miles), at the price of a hybrid, the Honda Fit EV would match the range of the current Nissan LEAF, while undercutting its price by a wide margin.

Under that short, sharply sloped hood is a small but eager 1.5-liter four-cylinder that makes 130 horsepower and 114 pound-feet of torque. The Fit comes standard with a 6-speed manual, with a continuously-variable transmission (CVT) available as an option. Manuals equipped with a 6-speed will manage 29 mpg city, 36 highway, 31 combined, while the CVT will do 33 mpg city, 40 mpg highway, and 36 mpg combined.

Despite being a relatively small car, there is lots of room for tall passengers in both the front and the back, and storage space is impressive. All 2018 Honda Fits get a reversing camera, a USB port, a liftgate spoiler, and a 5.0-inch touchscreen. The Fit Sport, meanwhile, comes with some cosmetic tweaks including several underbody spoilers as well as a 7.0-inch touchscreen with Apple Car Play and Android Auto. Upper trims get paddle shifters for the CVT that include a Sports driving mode. The range-topping EX-L model gets leather-trimmed upholstery as well as heated front seats. A navigation system is optional.

The Honda Urban EV concept was first introduced at the Germany Frankfurt auto show and the car is adorable. This concept sets the direction for the tech and design that will appear on a future battery electric Honda production model. From the Honda newsroom: A new model based on this concept will go on sale first in Europe, and then in Japan in 2020. It’s unlikely the EV will ever go on sale in the US.

The Urban EV is a full-electric concept 2-door hatchback (slated for production in 2019). It is actually only four inches lower than a Honda Fit. The EV is built on a completely new electric platform that will form the basis for other Honda EVs in the future. Similar in size to the Civic and Jazz, the new EV has a futuristic dashboard and interior. The vehicle will need to be considerably better than the Clarity Electric if Honda is to remain relevant in the EV age.

The concept car uses rear-hinged doors, similar to the prestigious Rolls Royce. This four-seater has an unusual sitting setup as it has a bench like seats at the front. In addition, both the front and the rear seats are upholstered in oddly different fabrics.

On the exterior designs, the urban concept car showcases advanced technology with a modest and yet sophisticated design. The car has low and wide proportions giving it the illusion of a small muscular stance that hint at the sporty driving experience.

Between the two circular headlights at the front, the car is fitted with display projecting information like greetings, pieces of advice for the other drivers on the road or charging status updates. At the rear taillights, it’s packaged also with a display screen showing the charging status and the logo of the Marque. The Honda logo on the concept is a representation of a new feature for the company’s future.

Inside the cabin, the interior is embellished with spectacular wood trims that compliment the large panel spanning dashboard. It also has an ultra-wide floating instrumental screen. The upper door panels are fitted with side view camera that feeds the side display screens.

The central part of the display presents information about the vehicle status, including range, remaining battery life, and energy consumption indications, while the extended door screens function as the cars wing mirrors through digital camera displays.

Honda added another cool feature to the package, the power management. The car is set to have a smart system that can actually store energy efficiently and releasing electricity. The generated electricity can be reused in the homes or back to the grid or used to charge other EV. The owner can use that as an opportunity to make some extra cash. 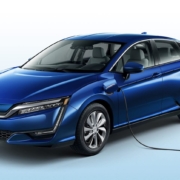 The Honda Clarity is part of a small but growing eco-friendly, plug-in hybrid electric vehicles. The car now has three powertrain choices which include gasoline, hydrogen, and electricity. The Electric is a five-passenger sedan. It is effectively a ‘compliance car’, due to its availability only in California and Oregon states. The vehicle includes four levels of regenerative braking (controlled by the deceleration selectors from the dashboard).

Electric cars are fast getting recognition and acceptance from the public but still have a long way to go. Maybe the advanced technology will catch up and the world will soon be filled with the autonomous cars. The clarity Electric car has not broken any records in the electric motor world, but the Honda is on the right way to hit the goal of selling over 75000 cars in four years.

The Honda Clarity is powered by a 161- hp, 221lb –ft electric motor paired with 25.5 kWh lithium-ion battery. It can be charged in a little over three hours via 240 –volt charger or to an 80 percent charge via a DC fast charger. Honda expects the clarity electric to have a 120/102/111 mpg- e performance on city, highway, or combined and an overall range of just 80 miles. It is significantly lower than its competitors.

The vehicle combined electric range is at 89 miles, which is significantly better in city driving where it rates at 96.7 miles of electric range. But on the open highway, its 78.9-mile rating is a real disappointment. As for the MPGe range, the clarity electric performs well in the city with a rating of 126 MPGe but lags a little on the highway at only 103MPGe.

The exterior design is a bit aggressive in its shape and more restrained in its details. The front seats are placed perfectly with enough room and shape for comfort and covered in perforated leather. The rear seat legroom is 36.2 inches while the measurements in the accord are 40.4 inches. This is enough legroom. When linked with the Honda Link app, cabin temperature can be preset, and other details such as range and battery status can be checked.

Basically, the ride in the Clarity is cushy and noiseless. The regeneration braking systems triggered by the paddles behind the steering wheel adds some engaging feature to the package. But the excitement fades rapidly and it’s quite easy to forget the paddles altogether.

Safety technology includes Honda Lane Watch warning system, adaptive cruise control, and more. Some time ago Honda announced it would make full-electric and hybrid versions of its Clarity hydrogen fuel cell car. Also in the series is the Clarity Plug-in Hybrid. The battery is backed by an 8-year 100,000-mile warranty.

The car is currently available on a US$269 / month lease (for 36 months), with $1999 due at signing. The estimated priced is based on data from Edmunds.com Honda announced a joint venture with Hitachi to produce electric motors for the industry.

NOTE: Sales for the Clarity show both the BEV (Full electric) and the PHEV (Plug-in Hybrid) sales numbers combined.