You are here: Home / Mini 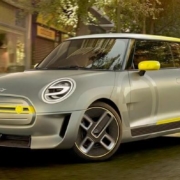 Mini has officially revealed a fully electric version and is attractive. The concept car will be taking the shape of its predecessor the popular Mini hatchback. The MINI Countryman Plug-in Hybrid is a car designed to bring the best of both worlds together with its dual engine. Built with outdoor adventurers in mind, it helps you to tackle new terrain while emitting less.

The Mini E had a large battery pack taking up too much space turning it into a 2 seater. Good news, the new Mini electric concept is a four-seater with descent cabin space.

There are exterior accents added to give the final finish a futuristic look, on the front-end trim and lower body. The yellow bar will be a brand signature of it being an electric car. The closed design on the grille will signify an absence of petrol and diesel engines.

The powertrain technology will be revealed by the BMW i3, which means it’s safe to assume it will range about 150miles and an electric motor that turns out at least 150 horsepower when it hits the showrooms in 2019.
Mini already sells a plug-in hybrid version of it, which combines a 1.5-litre petrol engine with an electric motor for official CO2 emissions of 49g/km and an electric-only range of up to 26 miles.

The test mules are spotted undergoing cold weather testing, something that’s important for any Electric vehicle model given that batteries tend to be less efficient during the cold season.

The company promises a car that will be efficient and a breeze on the road. It is not yet confirmed but the mini concept car will be ranging approximately about 26000 pounds.