You are here: Home / Porsche 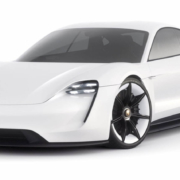 The Taycan (previously called the Mission E) is an all-electric sports car on target for production. The four-door saloon format is described as a four plus one with space for luggage in the front and rear. Its driving position is almost identical to the 911.

Taycan is the first EV of the Porsche. The automakers are still hyping everyone about its first ever electric car. Porsche is currently testing the prototypes of the Taycan under different climatic changes to make sure the car will be able to function properly without any glitches.

Porsche is also making no secret of just how many Taycan it plans to produce and sell each year: The automaker says that according to current estimates, it projects 20,000 cars per year, which it notes represents about two-thirds of 911 production.

Given the Taycan's expected positioning and the appetite of the market, this is still a conservative figure -- this represents total estimated production for all world markets. The U.S., China, and Western Europe are expected to account for a big chunk of these 20,000 estimated units, but that's still not quite the instant electric revolution that some EV manufacturers had in mind.

The automakers had been tight-lipped about the estimated price range, but now they have revealed it will be going for $86000. With more upgrades and options, the price could go a little higher than the initial amount.

The Taycan powertrain will develop over 600 horsepower via lithium-ion battery pack denser than what Tesla is offering. It is rated at 270kw. The car will have two electric motors, one in the front and the other in the back, which will provide an excited synchronous drive.

This powertrain will allow the Taycan production car to cover 0-62mph in under 3.5seconds and 0-124mph in under 12seconds hitting a top speed of 155mph. the target is for the Porsche to cover 310 miles on a single charge in just 4 minutes or almost 250 miles in 15minutes.

With the use of a cable charger, a distinction is made between alternating current (AC) charging with a conventional 400volts plug connection, with charging capacities of up to 22kw and DC of 350kw as chargers compatible with Porsche 800volts. The AC is used for the daily usage mainly at home or work, while DC is for fact charging on the go. The AC charger is permanently installed wall box or a socket.

Inside the cabin, directly above the drivers head, is a freestanding currently advanced digital instrument display as seen in the original concept. To the right is a small toggle-style gear selector for reverse, neutral and drive. A large infotainment screen, resembling the 10.1-inch unit used in the Audi vehicles.

A second touch screen sits in a slope center console separating the front seats, making the cabin have almost non-existing buttons. In the back, a recovered foot area was made possible by getting rid of the battery cells that were in that area to create more leg room.